Playing casino games at sites like W88 is fun but it is given that besides having fun, you must be smart about the way you play especially when playing against other players on the table because they too are there to win. This especially is true if you are playing a casino game like Poker since it is one of the most fun group casino games which requires you to genuinely be smart and quick with your next move. However, where you sit on the poker table is a smart move as well, let’s find out how.

First, let us address the question of whether poker table positions really matter or not because in the end, it is the best card hand that decides the winner of the round, right? Well, yes, but knowing the poker positions on the table is necessary so that you can come up with your own strategy. In Poker, think of the table being divided into 3 sections, the first of these sections is called the Early Positions, which means the people sitting on this side of the table are responsible for starting the game. The Small Blind and Big Blind

What makes poker fun, is that not everybody can place their wager together on the table. Instead, there is a person assigned for each new game round, to place a small blind bet.

Blind bets are literally “blind bets” in the sense that you place a wager without even seeing the hand dealt to you. Additionally, the small blind bet starts clockwise from the person with the dealer button.

Under the Gun (UTG) Position

As pressurizing the name sounds, this is the worse position to sit at because now you will have to act under pressure of continuing the betting round.

Also referred to as MP, Middle Positions are considered to be somewhat the best place to be seated at when playing the game of poker online but this does not mean that you should take the game lightly if you get a seat on this table. So, yes, depending on the poker table, there can be 1 or 3 poker MP seats. Playing from any of the middle seat, especially the last one if there are 3, is a slightly better option to go with.

Last but not least, we have the Late Positions seats, and they are the seats that wrap up a single betting round in the gameplay. The late positions seats in poker are also considered to be the best place to sit at as you can use your poker strategies more freely. This section on the table usually have 3 seats, Hijack, Cutoff, Button. 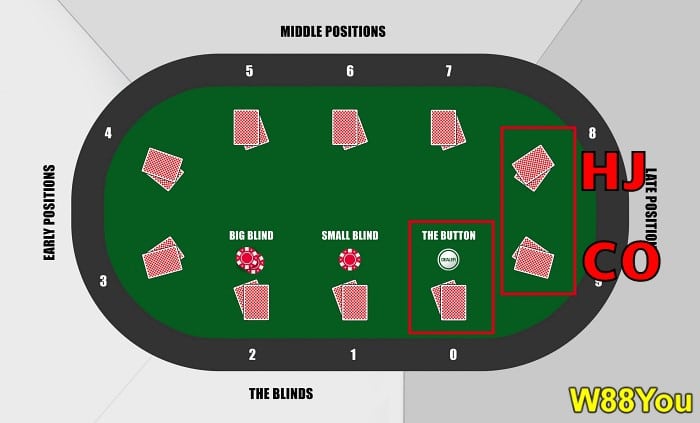 The Worst and Best Position in Poker Explained

We have now spoken about all the poker table position and explained all the details about them which could also be taken as some poker tips to play the game online. But the question remains, which table position is the best to be seated at when playing the poker game. Although you must have got the hint from above, here is a conclusion of which positions you should be careful of and which ones you should take advantage of.