What an easy match it was! Real Madrid vs Granada. Real Madrid lashed Granada with 4-1 goals and tops La Liga 2021. Take a look at quick highlights & celebrate!

A challenging away trip following the international break is always a hurdle, but Real Madrid came out of Granada unscathed. Marco Asensio held his spot on the right-wing and repaid Carlo Ancelotti’s faith in him, while Nacho came on in place of a jet-lagged Militao and scored as well.

In the 2nd half, Real Madrid cut open chances with ease and came away with a well-deserved 4-1 triumph. Find complete Real Madrid vs Granada highlights 2021 below.

Carlo Ancelotti’s side took a while to settle into the game, but they managed to score after 19 minutes. After latching onto Toni Kroos’ superbly weighted through ball, Marco Asensio showed amazing calm to run through on goal and finish past Luis Maximiano.

6 minutes later, the German maestro added a 2nd assist. Granada was caught off guard, so he played a corner short with Luka Modric before squaring for Nacho Fernandez, who finished off the underside of the crossbar with finesse. The visitors, on the other hand, were held at bay before halftime gratitude for some excellent midfield recovery work. The ball ultimately reached Luis Suarez, whose long-range strike deflected off Nacho and caught Thibaut Courtois off guard before nestled into the bottom corner.

However, 10 minutes into the second half, Real Madrid re-established their 2 goal lead with a brilliant breakaway play. Karim Benzema sprinted through the opposition half and into the area before superbly setting out Modric in front of the goal after a stunning 1-2 with Casemiro. Instead of scoring, the Croatian sent the Granada goalkeeper flying with a tiny trick before pulling back and allowing Vinicius Jr to tap into an empty net.

Following that, Ancelotti’s team began to show their true colors, and it was Vinicius’ unstoppable dribbling that saw the hosts lose a man with just over 20 minutes remaining. While sprinting down the left-wing and avoiding challenges, the Brazilian was met by an excessive challenge from Monchu, who saw red.

Following his appeal, Granada manager Robert Moreno was also sent off under pressure, effectively sealing the hosts’ fate in the match. It didn’t take long for the man’s advantage to take its toll. Ferland Mendy made it 4-1 in the 76th minute, receiving Casemiro’s pass in stride and confidently slotting the ball past Maximiano.

Real Madrid seemed to be content with 4 goals as they coasted to victory. With the 3 points, Ancelotti’s side leaps Sevilla and Real Sociedad into first place in La Liga, while relegating Granada.

Man of the match – Vinicius Junior

The Brazilian, Vinicius Junior, was the best player on the field. Anyone in the Madrid navy might have been the player of the match, and Asensio and Casemiro, in particular, put up memorable performances, with Mendy proving dangerous down the left flank and deservedly scoring. 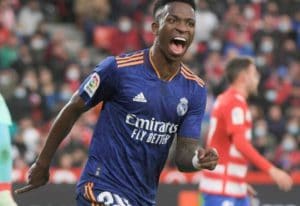 But it was the left-winger who stole the show, showboating at moments and driving his team to victory yet again.