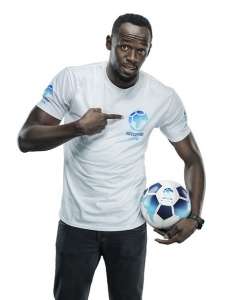 retirement from running track. There has been news stating that on June 10, Bolt has signed up for Soccer Aid leading a World XI team with Robbie Williams’ England as his opponent to be set in Old Trafford. Training and practice have been ongoing for the much-anticipated charity match.

Bolt is actually quite serious about this whole football stint wherein he is willing to train harder, faster and stronger for club managers to recognize his potential. This also gives Bolt the chance to train with the best of the Bundesliga’s football players.

The Olympian released a statement indicating, “in March we’re going to do trials with Dortmund and that will determine what I do with that career, which way it goes… if they say I’m good, and that I need a bit of training, I’ll do it.”

Usain Bolt’s ambition and dedication is no surprise saying “One of my biggest dreams is to sign for Manchester United. If Dortmund says I’m good enough, I’ll crack on and train hard. I’ve spoken to Alex Ferguson and I told him he needs to put in a good work. He told me if I get fit and ready; he will see what he can do.” “It’ll take time to adjust but once I play a few times I’ll get used to it.” The sprinter also admitted that he knows that football and track are different which is why he needs to adjust his techniques.